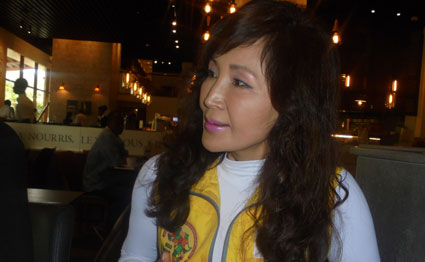 The baptism of one-year old baby Fidel Castro Ochieng at a church in Nairobi’s Kibra slum recently was quite an exhilaration, albeit one that went largely unnoticed.

Not only was baby Ochieng made to sit on the belly of a man of God who lay flat on his back, the rare baptism antics included lifting the baby aloft into the air, his frightened cries notwithstanding.

Conspicuous by her skin colour and looks among those lifting the baby to diffident cheers from the faithful, was a Korean lady whose exact role in the Roho Israel Church was not clear.

The 67-year old Chang Ok Lee later explained that she is not a member of the Church that conducted the baptismal ceremony for the baby, but a born again Christian with her heart in Africa.

“I was born in Korea but I love Africa and its people to the core,” she said.

Was that the reason why she was at a traditional African church? Chang blinks fast, then opens her small eyes wide.

“well, yes and no,” she says. “I have no qualms about any Christian faith, but on this particular occasion, I was invited by non-other than the baby’s grandmother who is among the many people I serve in Kibra.

Ms Chang was in Kenya for the umpteenth time since her first visit in 2005 when, as President of Christian Multimedia Mission Centre she toured Kenya, Tanzania and South Africa for a documentary depicting life in poor areas.

“I wanted to show through television broadcasts the real state of these areas to people back home in Korea who did not understand the depth of poverty that prevails in these areas so that they could offer assistance,” she says.

“My mission was to change the Korean thinking of Africa as a hostile land overrun by conflict to one where people are kind and loving in deprivation.

“Kibra in particular had struck me by its scarcity of toilets, a basic requirement for human settlements.

“I wanted to build some as a starting point to improve their lot, but that initiative ran into unexpected headwinds when land was not forthcoming,” she explains.

After a pause, she says: “I refused to be daunted and fell back to a craft that had worked perfectly for Korea in the pre-affluence days.

“In a Korea rived by poverty those days, mothers had to sew clothes to earn wages that they used to feed, clothe and educate their children. It is a practice that still goes on in Korea as a movement christened Saemaul, meaning ‘working together to be rich’. It has created openings once un-thought of and paved the way for self-supporting independence that has revolutionised lives for many in Korea,” she says.

Ms Chang is full of praise for Kibra MP Ken Okoth whose office has coordinated the distribution of over 100 sewing machines to deserving women groups in the sprawling slum, 80 of them this year alone.

Says Chang: “My goal is to make the sewing machine project sustainable by setting up a business enterprise model in the slum complete with an incubation centre.”

On the health front, she has conducted medical camps in Kibra where residents have received free treatment for various n ailments.

Besides Kibra, Ms Chang has distributed 30 sewing machines at the Jam City Slum in Athi River and built a Community centre complete with a community toilet incorporating an MPesa shop and an office that houses the area’s assistant chief.

Outside Nairobi, her ‘I Love Africa’ outfit has built boreholes at Lumbwa in Namanga, Kajiado County, Matuu in Machakos County, in Turkana and Garissa in the North Eastern region.

The petite Chang who looks younger than her 67 years says she hails from a royal family in South Korea that could not understand her bond with the poor in Africa.

“They discouraged me. Initially my husband was also against the idea, arguing that Africa was a dangerous place with too many problems to warrant my attention. I overcame the challenges and plodded on,” she says.

Her love affair with Africa dates back to 1977 when she accompanied her husband, then working with KUMHO tyres of Korea on a tour of duty.

“He had been posted there and I decided to leave my job as a television anchor to be with him,” she says.

“I fell seriously ill with Malaria and an eye disease that almost rendered me blind. I nearly died young but prayed to God to let me live and spend the rest of my life to please Him. I was miraculously healed without visits to hospital.

‘That marked the turn in my life. I became a born again Christian and started the ‘I love Africa crusade’ that has culminated in my work for the poor in Kibra and other places. I love Africa has a presence in all corners of the continent.

“Apart from empowering widows and other deserving groups, we provide child welfare services, access to clean drinking water where it is hard to come by, medical treatment and give relief food,” says Ms Chang.